Mummy Pig doesn’t get out much now she has kids, but when she does, she gets shitfaced.

She forgets everything, including her long day with her two little darling’s tomorrow.

At 430am Mummy Pig remembers she DOES have children when she stupidly tip toes up the stairs and forgets to jump the squeaky fourth step.

Now Peppa is awake, she wants to know the answers to all the important questions in life, like, why does everyone live on a hill? Why are some animals still, just animals? Why isn’t George’s name alliterated? What happens if Miss Rabbit has kids? Would she be Mummy Rabbit too?

Normally, on a Sunday, Daddy Pig is in charge, but today, he’s off to work over time. It could have something to do with Mummy Pig calling him a twat at 2am when he refused to let her in after she confessed to losing her keys. Again.

Peppa has gymnastics at 9am and George has football at 10, and it looks like it’s up to Mummy Pig to pull her finger out and get them there.

Mummy Rabbit is already waiting at the door, looking swag, while carrying the twins. Rebecca and Richard Rabbit wait patiently by her side, holding hands.

Mummy Rabbit takes her kids to the library while she waits for her eldest. Mummy Pig sits on the floor and gives George her phone, trying not to gag at the smell of all those feet.

Both kids are hungry after a busy morning. Mummy Rabbit orders her kids a healthy smoothie, and asks them to sit down and drink it quietly.

Mummy Pig gives Peppa and George the run of the vending machines, on the condition that they bring her back something yummy and smothered in chocolate.

Mummy Pig is knackered. Nothing pleases her more than thinking about heading home for a snooze on the sofa while the kids watch Bing on repeat. Then Mummy Rabbit lands a shocking blow….

“See you at the teddy bears picnic later.”

Mummy shoves everyone into the car and ignores Mummy Rabbit walking all her children to the preschool.

They get to the picnic and everyone is sat down eating. Mummy Pig hasn’t brought a picnic. She’s got a load of old shit from the vending machines and hopes no one notices.

“Sandwich.” George shouts. Mummy Pig tries to calm George by reminding him that normally he hates sandwiches and surely he’d prefer another bag of Monster Munch.

The blend of shouting kids, Quavers and Mummy Rabbit’s hummus gets to much for Mummy Pig and she starts to hallucinate.

George is now in full on meltdown mode at the prospect of not having a sandwich that he throws up his chocolate, crisp and Fruit Shoot combo all over one of Mummy Rabbit’s kids expensive lunchboxes.

This is it for Mummy Pig, who passes out in a strange mixture of shame, drunkenness and general hatred for all things kid.

Peppa starts to cry, setting off all the other kids into a high pitched wail.

It’s a good thing that Madam Gazelle is there then!

Madam Gazelle agrees to drive Mummy Pig, Peppa and George home, and sings like an angel to all the nursery rhyme tunes the kids like in the car.

He makes the mistake of mentioning how nice it was that Madam Gazelle drove them all home.

Mummy Pig picks up the nearest object and throws it at his head.

It’s the school holidays. Your kids are slowly melting into the sofa playing video games, or they have just attempted their version of the Sistine Chapel on the dining room wall. It’s time to sort something out that’s going to engage them without costing you (or them) an arm or a leg, metaphorically or physically. Rossall School have  some ideas you can do with them that will entertain them and spare your sanity.

END_OF_DOCUMENT_TOKEN_TO_BE_REPLACED

So the six-week holiday is almost upon us! Like all wholesome middle-class families, we’re frantically trying to think of ways to keep our brood amused for seven and a half weeks. God only knows why it’s called the “six weeks holiday” but there you go?!

Anyway, you may have visions of spending hot summer days at the beach with your little pumpkins lovingly playing in the sand together, while you sip on your Prosecco ice lolly in peace, quiet and tranquilly, or have dreams of the kids not twating each other over the head every thirty seconds and needing your presence just to breath.

END_OF_DOCUMENT_TOKEN_TO_BE_REPLACED

Looking at myself in the mirror, I’m the first to admit I don’t look old. Hell, I’m still doing what I did when I was 21, but with two kids in two.

I still say the word “cool” and listen to Radio One (sometimes on low volume) and feel like I’m down with the kids.

In till recently when I a teen offered to carry my Asda bags to the car as the kids were kicking off and called me ma’am, and you know you’re old when not even the old dears ask you for ID on a Tuesday night for your favourite bottle of Pinot.

On a bad day, I start to see all those white hairs on my vag or a slight balding spot on my scalp. I can recommend NOT Googling vaginal dye by the way.

END_OF_DOCUMENT_TOKEN_TO_BE_REPLACED

“Ok, so this one is a bit more straight laced than i’d normally write, but please bear with it. For all of you that are unaware (that’s probably about 5 of you) i also write on S4SM about saving money, so it seemed kind of natural to accept it on here, to give you guys a few tips on saving money during what i can only call, one hell of a week. Laura”

With the school holidays fast approaching, it can seem overwhelming when you’re trying to think of how you can get out of the house without spending a small fortune. No matter how precious your little ones are, after six weeks sat at home with them all day and you’ll be crawling the walls. There’s still plenty of time to think about how you’re going to tackle the summer holidays without breaking the bank. Auto Advance have some hints and tips on how you can save for a stress-free six weeks.

END_OF_DOCUMENT_TOKEN_TO_BE_REPLACED

(***Disclaimer – I was given a complimentary ticket to go visit the Watercress Line on a Thomas day out. All thoughts and actions are my own.  If you’d like to know what it’s really like aka without the funny and more factual, then please see here. For a laugh, keep reading. Thank you.***)

It’s the night before their first nappy free trip out with The Second Child and The Unsung Mum is happily dicking around on Facebook and ignoring her children when an email pops up.

END_OF_DOCUMENT_TOKEN_TO_BE_REPLACED

For once, I’m going to be super helpful and share with you some of my very own top tips on how to be the very best parent ever! If you already feel that the carefully constructed felt tip pen drawings on your newly painted hallway walls really offer something extra to the room, then I’m sorry, this post isn’t for you. Fuck off.

END_OF_DOCUMENT_TOKEN_TO_BE_REPLACED

Text to The Hub:

(Yes, I’ve realised how sad it is that we text each other emojis. We don’t get out much, least of all with each other, and chatting face to face is so 2007!)

He comes down the stairs from having (what I can only imagine of course) the biggest shit ever or just from his “go to” hiding place with a smirk on.

END_OF_DOCUMENT_TOKEN_TO_BE_REPLACED

Now I have two sprogs, the humble baby group is like mecca to me, I generally couldn’t live without them.

They’re cheap, not at my house and you get drinks and biscuits thrown in. What’s not to like?!

Yes, of course, like anything there are a few potholes in this plan. One being that you normally have to make really awkward small talk to a bunch of people you’ve never met, and keep a smile plastered on your face, even though Little Jimmy is screaming he wants to go home at the top of his lungs. To be honest, I don’t mind a bit of small talk. After all, small talk or not, it’s still an actual conversation with an adult, which is normally better than debating with my four-year-old on why I’m such a poo poo face, for the millionth time.

END_OF_DOCUMENT_TOKEN_TO_BE_REPLACED

As you all know, i love a good guest post, especially one that’s as funny and truthful as this! If this is right up your street, then why not check out Helena Pugsley’s blog for yourself.

I usually start with the “keep mentioning it to get them used to the idea” tactic for a few weeks first. Usually met with much resistance. Then I break out the “you can have whatever treat you want” bribery mode. Also usually a total fails and I still end up having to give him treats as I’ve upset him so much with my evil promises of a hair cut that it is the only way to get peace restored.

END_OF_DOCUMENT_TOKEN_TO_BE_REPLACED 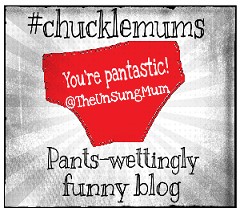